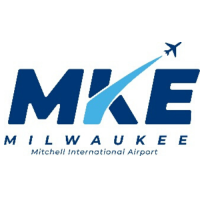 MKE was honored for distinguishing the Airport brand in the minds of passengers, both locally and from afar. MKE’s new brand statement, launched early in 2019 as Milwaukee Mitchell International Airport, more clearly identifies the Airport's geographical location. MKE’s logo was also redesigned in a more fluid and modern style. A
Milwaukee Business Journal poll found that 75% of readers agreed with the rebranding.

"The Airport's brand identity and logo were reimagined to better reflect the location of the Airport and to refresh MKE’s image in the minds of travelers," Airport Director Brian Dranzik said. “This award – from an internationally-known industry organization – shows that rebranding was the right move for us to make. It’s a true honor for MKE to receive these accolades from our peers.”

MKE's 2019 “Love to Travel” campaign injected personality into the brand and made a strong connection with passengers. Advertisements ran online, streamed on Pandora radio, were shared on social media, and were displayed on outdoor billboards. The campaign generated 7,302,344 digital impressions and 30,303,872 outdoor impressions, and the social media portion significantly exceeded industry standards.

The Airport partnered with Milwaukee-based advertising agency Boelter + Lincoln on the concept and creative elements for this year’s rebranding and the overall marketing campaign. MKE has received ACI excellence awards for the last three years running.

MKE currently offers nonstop flights to 40+ destinations coast-to-coast, and 160 international destinations are available from Milwaukee with just one connection. MKE is served by Air Canada, Alaska, American, Delta, Frontier, Southwest, and United. The complete list of nonstop cities can be found at mitchellairport.com.

Milwaukee Mitchell International Airport is owned by Milwaukee County and operated by the Department of Transportation, Airport Division, under the policy direction of the Milwaukee County Executive and the County Board of Supervisors. The Airport is entirely funded by user fees; no property tax dollars are used for the Airport’s capital improvements or for its day-to-day operation.
Contact:
Harold Mester, C.M., Director of Public Affairs and Marketing
Business Directory News Releases Events Calendar Hot Deals Member To Member Deals Job Postings Join The Chamber

Serving the communities of McHenry, Johnsburg, Lakemoor, Wonder Lake, McCullom Lake, Ringwood, and beyond, our members come from all over McHenry County, Lake County, and Southern Wisconsin.  The McHenry Area Chamber serves area residents and its 650+ members by providing services and programs to enhance the growth and development of the local business community, as well as to improve the quality of life for those who live and work in the greater McHenry Area.